Encounter with a Bucharest Cab Driver

Not too much to report today, unfortunately. Had breakfast and took the train to Bucharest. I love the train. The trip was about two and a half hours and the first portion followed a little river through the mountains. Flat farmland after that.

No trip would be complete without getting ripped off by a cab driver at least once, and it would just so happen that was the case for the ride from the train station to the hotel. Romania and Bulgaria are famous for it. Any amount of reading will warn to to stay away from the taxis immediately outside the airports and train stations and walk a block, but when we arrived, they had the taxi area controlled and taxis had to use badges to drive through a gate. There’s also a machine that orders you a taxi and spits out a ticket with company name and car number. We figured maybe it was more legit now than our Lonely Planet book described, published a couple years ago. We were wrong. Sigh…

You have to confirm your taxi cost before you go anywhere and insist they use the meter. They’ll say the meter is broken and, even when it is working, they’ll insist you owe them the price they quoted you and not the meter price. Things are so cheap in both countries that it’s hardly worth arguing about, but they’ll quote you thirty euro to go on a ride that will only cost ten Bulgarian lev if you’re not careful. And even the ten lev ($5.70) might be inflated. In Romania, it’s lei, and we just paid the agreed upon ten instead of the metered 6,40. To put things in perspective, 6,40 lei is $1.61 and the ten we paid was only $2.52. As far as I’m concerned, it’s the principle. 91 cents not earned by some sleazy cab driver and my 91 cents that I did earn. And I didn’t take advantage of anyone to get it either. Gives me anxiety every time.

Tonight, we’re staying at a five star hotel in Bucharest’s Old Town for a ridiculously cheap price. Checked in and walked a circuit around downtown that included the Cercul Militar, the Palatul CEC (which is literally a bank palace), the National History Museum, Parliament, the Justice Palace, and a church called Curtea Veche. Aside from being big and old and ornate, none of them were all that fantastic, to be honest. (Budapest was better.) Parliament is cool in that it’s gigantic and all white and, we were told twice, the second largest building in the world aside from the Pentagon. (I’ll have to fact check that.) The church was cool enough also. We cut through the middle of the loop to get back to the hotel since is was sweltering outside and found the restaurant and club district. Streets and streets of both. 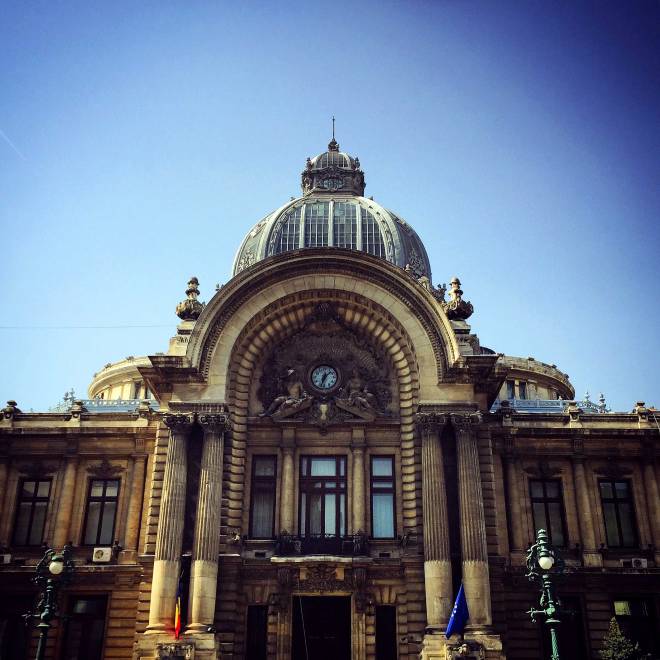 Decided to take it easy for the remainder of the day and evening and ordered room service. Delicious. To our benefit, the inflated hotel food prices amounted to normal American prices. Maybe a little less even. Apparently, they have Romanian HBO with Romanian movies, though later in the evening, it played “Nightcrawler” with subtitles.

Tomorrow, we’ll be flying to Istanbul for a whopping $90 per person on some unknown airline called “Pegasus.” Only an hour and a half flight. The realities of getting home and heading back to work are beginning to set in. They’ve popped into my head once or twice thus far, but now they’re lingering longer. Ugh…

Looks like the Romanian Prime Minister has been indicted for corruption, which apparently runs rampant in Romania. I saw the breaking news on the hotel lounge screens yesterday and used Google Translate to figure out what the big deal was, but it just said, “Ponta Indicted.” I had no idea who Ponta is. Then it popped up on BBC. Gotcha. Kind of a big deal here, I guess.

Had a lovely breakfast before another scrappy battle with a cab driver to the airport. When checking in at the airport, they told us we had to plastic wrap our packs at those special Saran Wrap stands. We got two free tickets to do so (3 lei otherwise) and, in just a couple of minutes, Jeff’s pack looked like what he referred to as a little pink turd. Mine, a pink potato.

Our flight was quick. I had an obnoxious seat neighbor behind me. You know them. Someone who slams their tray up and down, grabs your seat repeatedly to adjust their crap and themselves as you jerk up and down… any kind of possible movement that would disturb the person in front of them is done at full force and with complete disregard. Yep. One of those. Other than that, the flight was totally fine.

We landed at Sabiha Gocken Airport, which is different than Ataturk (where we came in) and sits on the Asian side of Turkey. Technically, now we’ve been to the Asian continent, though I wouldn’t consider that “visiting Asia.” (Jeff likes to say that to get under my skin.) Checked into our final hotel, a couple blocks away from our last one. This one has a terrace looking up at the Blue Mosque on one side and the Bosphorus on the other.

Relaxing in Istanbul For an Evening

Went for a walk downtown and got Jeff a legit Turkish shave. They use a straight razor, light a cotton ball on fire, and run it over your face and ears to get any left over fuzz. $5. Had a couple drinks on the main drag to enjoy our last day and pondered our next trip. (Normally, I’ve got the next three planned in advance, but with work lately, I barely finished planning this one before we left.)

Every trip we go on, we notice a particular song that the locals are seemingly in love with because it plays over and over and it’s everywhere. In Bosnia, it was Jason Derulo’s “Wiggle.” Here, it seems to be Fifth Harmony’s “Worth It.” Everywhere. Every other bar on the strip was playing it.

Went back to our hotel where we sat on the terrace and had a couple more drinks. Chatted with the gentleman working the restaurant for quite some time about Turkey and Romania and Bulgaria. Learned a bit about the prayer calls and various religious views in the area. Caught the sunset prayer call. (So cool.) Eventually, the hotel manager came up and yelled at him, presumably to get back to work.

Tomorrow, we’ll be headed home. Parting is such sweet sorrow.

Found the hotel receptionist fast asleep this morning. He was out. A rumpled mess on the lobby couch. Evidently, I startled him and he immediately got up to offer me coffee… and then came back to tell me I couldn’t have coffee until seven. Um… okay. Continue napping. I won’t tell anyone. (Except Jeff and all of Facebook.) Coffee would’ve been really nice, though.

Was looking forward to spicy marinated mushrooms and potatoes for breakfast, but alas, they didn’t have them. Instead had some sort of scrambled egg and salsa mixture and a bean salad. Good stuff. While we were getting food, a bird flew into one terrace window and smashed into the closed one on the opposite side, which made Jeff and the wait staff laugh hysterically.

Hung out for a bit before heading to the airport. Istanbul airport is a complete zoo, by the way. The flight back was eleven hours and I got stuck in a middle seat, unfortunately. (Note to self: After this trip and Fiji, I will pay extra to reserve seats next time!) Watched a lot of movies and ate a lot. Arrival at Dulles was stressful. We got in early, but sat on the tarmac for a half hour and then baggage claim took ages and ages. It literally took us two hours just to get to our car after landing. And there wasn’t even a customs line! (They have the customs computers at Dulles now. Yay!) Happy to be home with my furbies, but sad to return to normal life.

Turkey, Bulgaria & Romania in a Nutshell

Random notes and our overall trip, in conclusion… Jeff and I both agree this trip was a bit of a mixed bag. Not among our top trips, but not the worst one either. Istanbul was culturally very interesting and majestic and we did drive by some more cool stuff on our way from Sabiha Gocken Airport. The Grand Bazaar and Spice Markets were not for us personally, though I understand they’re highlights for many travelers. See a full 7-day itinerary in Turkey for even more great sights! There’s plenty more to see in Bulgaria and we just did a quick pass-through. Sozopol was a tiny, but very interesting Thracian town. Not enough to entertain you for a full day I don’t think. Jeff and I are fast-paced tourists, however, so maybe there’s enough there to fill someone else’s day. Lol. The highlight was surely Transylvania. There are six other towns just like Brasov in that area and I could have spent maybe two more days happily touring. Bucharest I could definitely leave behind. I had higher hopes and imagined it to be a little more Budapest-y, but it just wasn’t.

I would definitely recommend the trip for other travelers. We basically visited three entirely different cultures in nine days—three different languages with three different currencies. Istanbul obviously has a heavy Muslim population and, with that, comes customs and experiences entirely different than what you’d be used to. At the same time, the city is very westernized. Everyone was so, so friendly and accommodating. The Bulgarian language sounds like Russian to a non-speaker of either language. Everything sounds a little threatening. Lol. And everything is in Cyrillic, which makes it seem even more foreign. It is pretty cool, though, and the landscape was scenic. Interestingly, Bulgaria’s neighbor is significantly more European. Romania doesn’t use any Cyrillic and most people speak English, though they also speak German and French. We definitely have a couple service recommendations we’ll be making online from the trip, including Kartsi and Ventsislav.

All in all, a nice trip and so inexpensive. My standing advice to folks looking to get out and see the world: get in on the up-and-coming countries before they reach their tourist peaks and travel in the shoulder seasons. Both will save you huge amounts of cash and neither will prevent awesome memories from being made.

Today’s featured photo: View of the Blue Mosque at sunset from our hotel terrace.