Yes, I have a thing for exotic little islands—the Azores, the Galapagos, Capri, Japan, Fiji, Islay, New Zealand, Iceland, and, my latest addition—the Faroe Islands. Several people told me they had no idea the Faroe Islands even existed, let alone where they were. I’ll save you the suspense and just tell you that they’re located in the North Atlantic almost smack dab in the middle of Iceland, Norway, and the UK. The islands are an autonomous country of Denmark; the people speak Faroese and Danish, and their currency is the Faroese krona. That’s the Faroe Islands in a nutshell, folks.

And, while everyone and their little dog too, is flocking to Iceland right now, the #AdventurePartnerForLife and I recently opted for its little-known neighbor, the Faroe Islands. Okay, sure, we’ve already been to Iceland and it was insanely awesome (go!), but… the Faroes are pretty awesome as well and off the beaten path… for the moment. Iceland admittedly has more diverse natural landscapes, but the Faroe Islands are environmentally similar in many ways and equally stunning.

So what does this place you’d never heard of until now have to offer an insatiable wanderluster? Or just a curious traveler?

I’m just going to go ahead and put this out there now, just be up front about it: they offer sheep. A lot of f*ckin sheep. It may not seem like a highlight, but it quickly becomes one. I, myself, was immediately surprised and delighted, all in one fun, little package. They’re kind of hippie, free-range sheep. (Not like those trimmed, perfectly coiffed Scottish sheep.) And they’re everywhere. If you go in May when we did, you have the added excitement of seeing the spring lambs. In fact, here’s a whole Faroese sheep collage for you:

Now that we’ve got that out of the way, just stay with me…

See. Featured. Photo. Saksun may have been my favorite place in the Faroe Islands. Honestly, there were so many jaw-dropping sights to choose from in the Faroes, but there was a lot of time to be spent here. I could’ve stayed longer and explored more for sure.

The village of Saksun has fewer than thirty people and the “bustling epicenter,” as it were, really consists of a small museum (seen below) and a quaint stone church (featured). What’s particularly impressive about this little nook in the universe is the tiered waterfall that serves as the village backdrop and the Pollurin tidal lagoon that drops dramatically in front of the church. At low tide, it’s possible to hike down to the lagoon and walk out to the open sea.

The stretch to Tjørnuvík was one of the last portions of roadway to be completed in the Faroe Islands and, when you make the drive out there, you can easily see why. Imagine narrow switchbacks with 1,500-foot cliffs straight down to the ocean. Yep. It’s pretty impressive and not for the faint of heart. When you arrive, however, it’s a sight to be seen—a tiny little settlement situated in what Bradt calls a botnur, “a glacial circular valley formed during the ice age.”

In typical Faroe fashion, there are, of course, waterfalls. (Much like Iceland, the country indeed has a seemingly never-ending supply of waterfalls.) The village also has the added benefit of spectacular views of sea stacks not too far off the island’s edge. Yes, when you reach Tjørnuvík, you feel like you’ve arrived at the edge of the earth.

Gásadalur is probably one of the more recognizable Faroe Islands sights, as far as recognizable Faroe Islands sights go—a slender, but plentiful, waterfall nestled in a craggy cliff that drops right into the sea. The funny story about this sight is the #AdventurePartnerForLife and I almost left because we couldn’t find it! Can you believe it? I have a lot of regrets in life, but this one would’ve really sucked.

How could this happen, you ask? Well, I’m sure you’d be surprised to learn there’s not exactly a bevy of travel guides on the Faroe Islands. Our Bradt book was touted to be the best for our destination, but alas, lacked the informational photos our usual DK Eyewitness Travel Guides provide. So, we just had black and white copy in front of us and this random town on our list, with no reference of why we were going and, from an American point of view, these Scandinavian names all start to sound the same.

The town is incredibly remote and was actually almost on the verge of “extinction” at one point; it had twelve residents and no vehicle access. But times, they are a changin’ and Gásadalur now has a whopping eighteen residents and a road! Anyhow, we got to this tiny village where there was supposed to be some non-descript waterfall—of which we’d seen a hundred at this point—and you couldn’t see it off the road or up in the mountains. We had no idea why we were there. As we were leaving, I saw this little road sign. And, there you have it—Gásadalur. 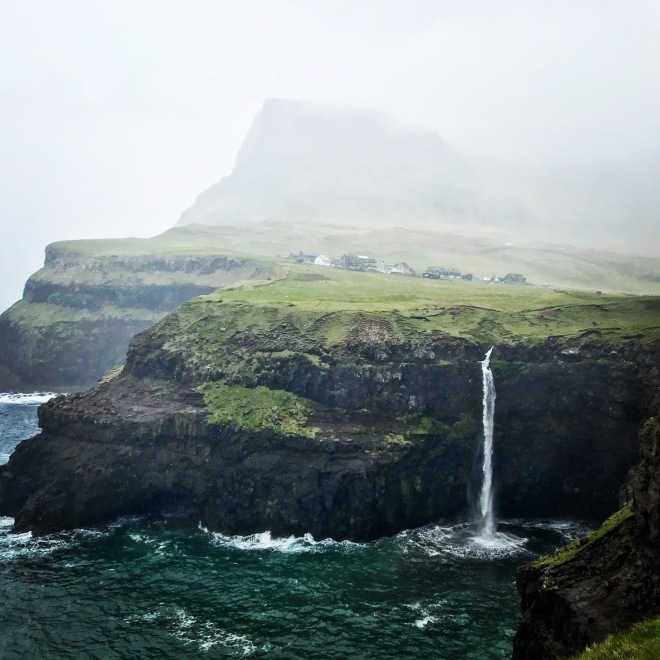 Borðoy is one of the northernmost islands in the Faroes and, I’ve read, much less frequented than other regions. But, if you ask me, this is exactly what gives it its mystique. There are some random things happening up there. For example, a tiny little forest meant to be a reforestation effort since people cut down what few trees were there long, long ago. Also, though—Múli.

Múli is the abandoned remnants of a once-productive Faroese settlement. It used to have thirty or so residents, but by 2002, had only four. Now, none. It’s three little houses out in the middle of nowhere, flanked by—you guessed it—a waterfall! For a long while, the village was only accessible by boat and it wasn’t until the ’70s that it even received electricity. If you’re like me and love a good abandoned site, this one will fill your “eerie quota.” 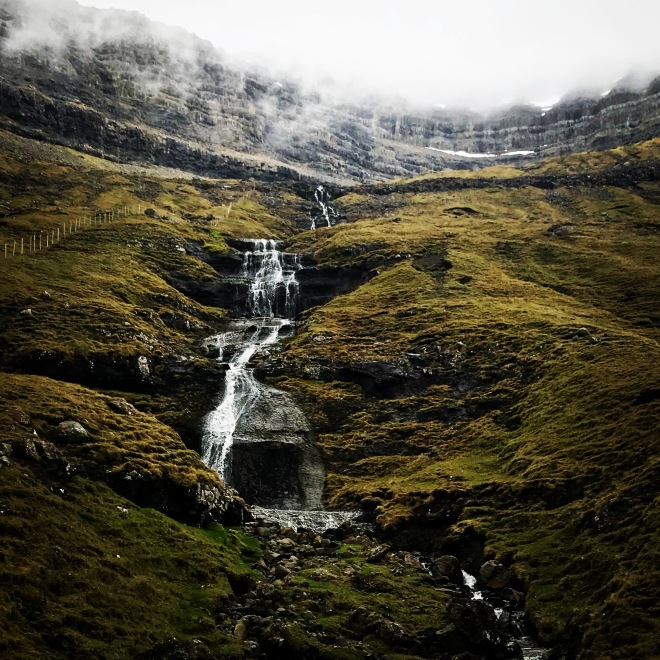 Tórshavn is the Faroes’ quaint little capital city with a population of about 13,000. Enjoy a stroll through the harbor town’s winding streets lined with colorful, grass-topped homes. Small cafes and restaurants and shops are abound. P.S. The sun never sets in May. …Ever. Exhibit A, photo on the left.

No more than a half hour outside the city, you can visit Kirkjubour, a settlement dating back to 1100. There, you can see the oldest inhabited wooden farmhouse in Europe, Roykstovan, as well as the Magnus Cathedral. Olavskirkjan church (photo, top right) is the oldest church still in use in the Faroe Islands. All three buildings were constructed in the 11th and 12th centuries. 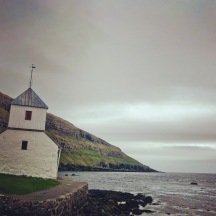 I’d mentioned Gásadalur as a commonly-photographed Faroe sight, but Sørvágsvatn and Mykines are probably the other two beauties you’ll come across if you’ve ever done a little Faroese research. Jeff and I stopped off at Sørvágsvatn, or “Hanging Lake,” but it was much too stormy outside to make the trek to witness its actual magnificence. What’s the big deal? Why is it called “Hanging Lake?” Just take a look (top left). A wondrous optical illusion. We were lucky in that we got to view it from above on take-off!

Not to be missed—the Faroes have puffins, too, dontcha know. And everyone loves a good puffin. (You do, too; I just know it!) Unfortunately, the swells were too intense to keep the ferry running to Mykines when the hubs and I were visiting, but Mykines is Puffin Central for the Faroe Islands. Orinthology aside, that island itself is a sight to be seen I’m told. (Photos, bottom left and right.)

I confess that I can’t claim credit for these three particular photos, or the sheep photos, but the rest are indeed “mine own.” (The video is mine!) Sorry to let you down; “I just couldn’t make it on time.” (Bonus points for anyone who knows where that gem’s from.) 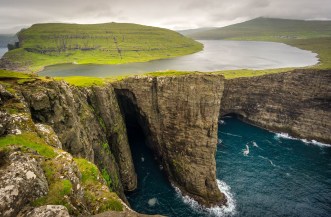 Two airlines fly to the Faroes—Atlantic and Scandinavian—and they fly out of Copenhagen, Reykjavik, Edinburgh, and Bergen somewhat regularly. (“Somewhat regularly” meaning they flew in and out of Edinburgh on Mondays and Fridays.) Flight times are short, only 1–2 hours. And it’s not too expensive; we paid ~$250 each roundtrip. So… go to Iceland and then fly to the Faroes. How about that?

Tracking down a car rental shop with available automatics was a little tricky, but the Visit Faroe Islands site was my North Star for this itinerary; that’s ultimately where I found one (as well as a ton of other information). Enjoy!

Today’s featured photo: Saksun’s stone chapel sits cheerily at the base of a glistening waterfall and overlooks the Pollurin tidal lagoon.