Where in the World is Global Debauchery?

Well, well, well… what have we here? An abandoned hotel in the Azores, one of my fav travel destinations so far.

The Hotel Monte Palace in São Miguel, Azores would be the perfect place to stay, but for the fact it’s completely falling apart. It’s actually perched on a mountaintop overlooking the super picturesque Sete Cidades lagoon and offers some of the best views on the island. The hotel opened in 1989 and was the Azores’ first 5-star retreat, complete with every imaginable amenity—restaurants, a bar, a nightclub, a hairdresser, even a bank. A year later, it was awarded Best Hotel of the Year in Portugal… and then it closed. (I actually read it closed the same week it was awarded the honor, but I was unable to confirm elsewhere.) So, what went wrong? Simply put, the Azores wasn’t quite the travel hotspot that it is now. Folks just weren’t vacationing out in the middle of the Atlantic Ocean like they are now.

Security guards and dogs roamed the grounds for a solid decade after the majestic Monte Palace doors closed, but apparently, they just stopped getting paid, so… they left. At that point, the place was completely abandoned and fell into disrepair. Now? A dark tourist’s wonderland! You can literally walk right in. There’s no fence or barbed wire keeping you off the property. Do be careful, however—there are open elevator shafts and pieces of ceiling barely hanging on. Just don’t be a dumb ass, okay? Bring a flashlight, some sturdy shoes, and your camera.

How Do I Get There?

The hotel is pretty easy to get to, though my dad was being Super Mario in our rental car and we did almost miss the stop. Otherwise, you can’t miss it. It’s on a single road, one way in, one way out—Vista do Rei (View of the King). At the exact same stop, there’s also a hike to another Sete Cidades overlook (starts at the far end of the car park). Make a day of it. Bring snacks because there’s nothing else up there. We also found few places to eat in the Sete Cidades town itself down below.

Random aside: Just now, when I went to look the exact location up, Google Maps has a burger truck pinned right there. Maybe someone got smart! You go, and let me know if this elusive food truck actually exists. If it doesn’t, I’m retiring and starting a new business.

There is a little good news here for the building (depending on how you look at it). Since the latest Azores tourism boom, a real estate group has purchased the property and is set to re-open the doors in 2021! I say “depending on how you look at it” because, if you have a thing for decrepit, abandoned places like I do, you’d better get there fast. Maybe I’ll stay after the renovation, too. Cool idea, right? Before and after? 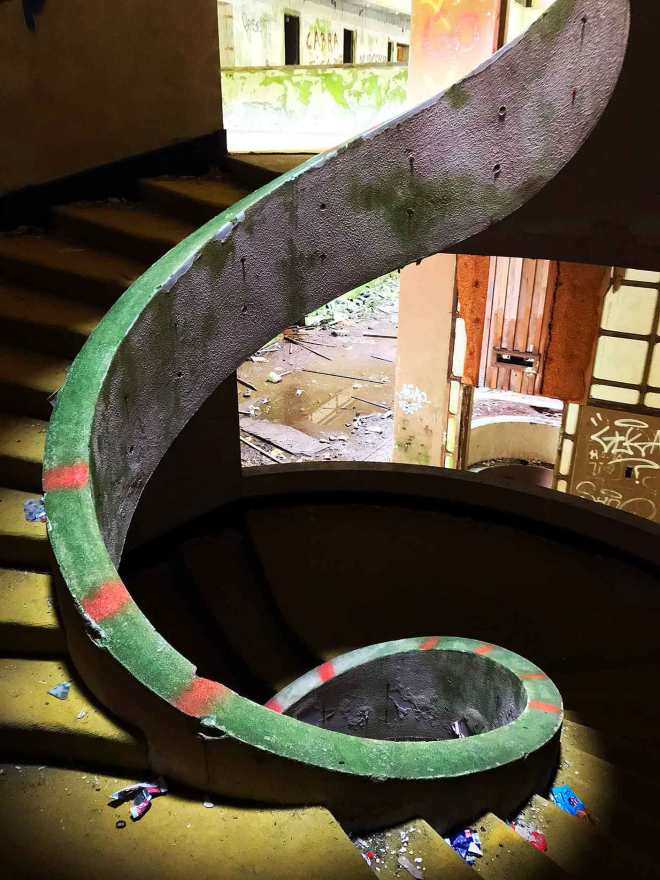 (Yes, yes, I know. “Salud” is Spanish and the Azores are Portuguese. I’m sorry! I have yet to make a Portuguese “cheers” graphic. I don’t have every language, folks; I just do the best I can.)